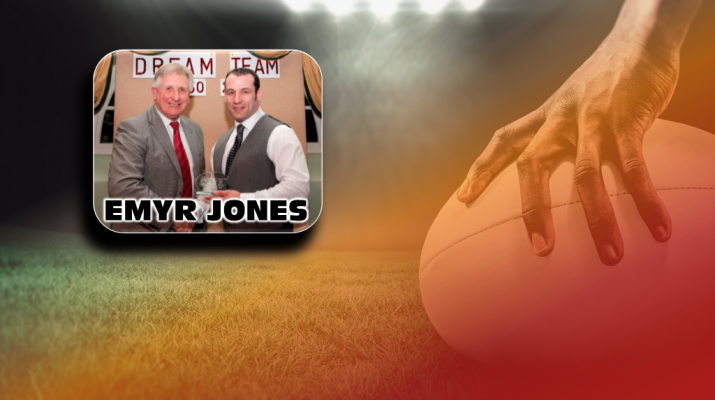 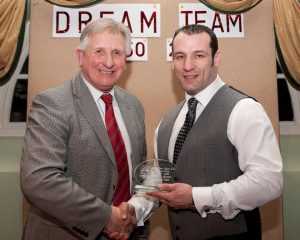 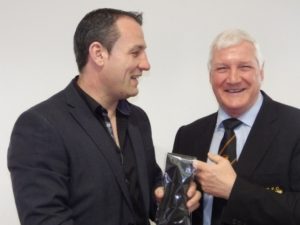 Emyr joined us in August 1998 after we had won promotion into 3 of the Welsh League, from Newcastle Emlyn.

Season 1998/90 Emyr was to able to show his class and go on to be one of the Quins notable signings. He scored 12 tries in his first season, and his displays led to the Quins only losing one of their 26 League matches and go on to top the Division and promotion. There were many outstanding matches. Resolven had visited the Park and after a difficult match the narrowly lost 28- 27. The return fixture was for the following Saturday, and with them having an unbeaten home record, the Quins were in for a difficult encounter. Such was the resolve of the team that they outplayed them to the tune of 37 -15, 5 tries to nil. Emyr  was outstanding. He scored a try in our record win over Kidwelly, 75 – 3 and 13 tries., And of course, Emyr’s hat trick against Max Boyce’s Glynneath in their victory by 76 – 10.  He went on to play in 24 of the 26 League games.

The 1999/00 season, the Club wanted to end the century on a high and they certainly did just that. Emyr scored a try in a 10 try, 68 – 10 win over Ystradgynlais and went on to score 26 more tries, which included 4 against Mountain Ash and 3 against Llantrisant. He played in all 26 League matches and the team finished runners up in the League with only three defeats, with 11 win doubles, the perfect way to end the Twentieth Century.

The season 2000/1 saw the Club play in the second tier of Welsh Rugby, Division 1. Emyr scored 13 tries in the teams 28 wins out of the 30 League matches, to finish 4th of the 16 team Division. They set their stall out with a 15-15 draw with Aberavon in the opening match, and Emyr’s 2 tries in the Quins win over Llandovery by 29 – 22, and a hat trick over  l Treorchy a little later, and 2 more a week later against Llanharan.

Season 2001/02 The Quins, finished 3rd in the 17 Club division and again Emyr played in all 32 League matches and was now playing in the centre. He scored 17 tries leading up to us finishing in 3rd   place, just missing out on promotion. Emyr scored 4 tries against Merthyr when we beat them by 85 – 5. We won 23 games with 1 draw to finish in 3rd place and again just missed out on promotion.

Season 2002/3. Emyr opened his season with a try in the 4th match , Blackwood in the Park, this was to be followed by the seasons highest scoring match, Treorchy, in the Park,  74 – 10, and by strange coincidence, the next  match,four days later against Rumney ,ended with a 74 points to 7 victory. This was followed by 25 wins out of 34 League games to finish in 3rd place and Promotion to the Premier Division. Included in this was a win double over Llandovery , which is always good news and 7 other doubles. Emyr scored two tries in games against,Beddau, Aberavon and Pontypool. Promotion into the Premier Division was our reward, after scoring 140 tries, Club record for a season.

2003/04   We joined 15 other Clubs in the top tier of the Welsh Leagues and won 17 and 1 draw of the 30 matches to finish in 5th place . Emyr crossed for 10 tries along with several ‘Man of the match’ awards. He scored a try in the seasons highest score, against Ebbw Vale 46 – 6.  Emyr played in 27 of the 30 league matches, and was in the side that beat Pontytpridd 27 – 16 and narrowly lost by one point at Sardis Road, and another Double over Pontypool.

Season 2004/05, Emyr played in all 32 matches and scored 10 tries, and the second match in, was our visit to Sardis Road, on a wet and miserable afternoon, the team were to blast them off the field and silence the normally noisy home crowd. Our 23 – 0 win was the first time in living memory that they failed to register a point at home. Emyr was quite outstanding, and crossed for a try. The side were successful in the home return match by 28 – 13, making us the only side to get the double over them that season. The very next match, we registered the Quins highest Welsh Cup score of 81 – 0 over Tredegar Ironsides and yes Emyr crossed for a try there. He also scored a try in the Cup game against Cardiff and won 17 – 11. Another Club Record was created when we recorded our highest draw 28 -28 against Swansea.

Season 2005/6 With only 9 wins out of 30, relegation followed. Emyr scored his 100th League try agaist Pontypool, and still managed a win over Pontypridd in the Park by 32 -15. And the double over Pontypool.

Over the past few seasons he was a member of the Welsh Fire Brigade team.