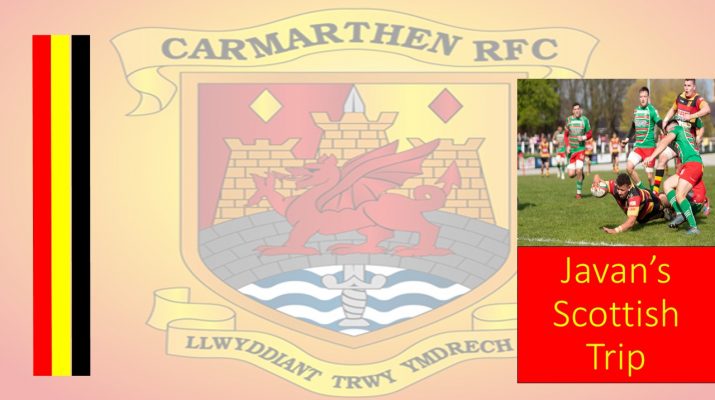 With the summer of sport almost upon us and as all eyes are currently on the Welsh football’s team journey in the European Championship and of course the Lions starting later this month with a game against Japan. We take a look at the Summer Rugby internationals.

We start this feature by taking a look at Scotland. Scottish rugby will embark on a ‘Summer Tour’ playing England A on 27th June, Romania on 10th July and Georgia on 17th July.

The club was delighted when Javan Sebastian was named among the Scottish Squad for these games. Javan a powerful prop forward featured for the Quins over two periods between 2013/2015 and 2016/2020 amassing 115 appearances in Cardinal, Amber and Black 96 of those in the Welsh Premiership, 15 in the cup and 4 friendlies. During his stints he crossed the line for 8 tries.

Following the announcement of the squad we caught up with Javan for a quick chat.

So I am eligible through my dad who was born and raised in Scotland (Edinburgh).

How and where has your rugby journey taken you?

My rugby journey started at  Carmarthen Athletic RFC juniors then to the Quins and then back to the Athletic. Form there I was selected for the Scarlets Academy but released and joined up with Glasgow and a club called Ayr  RFC. After a season in Scotland I returned to the Quins and was again picked up by the Scarlets where I am today.

As you say you started with Carmarthen Athletic mini and juniors. How important do you think mini and junior rugby is and what can it teach children?

Mini and Junior rugby is really important even more so for kids from Carmarthen teaches you many of life’s lessons at a early age not just the skills aspect of rugby but skills like communication. It also teaches children respect which stands them in good stead as they grow older. It is great to see Carmarthen have two thriving mini and junior sections.

You  played over 100 games for our First XV during two stints with us. How did this assist with your performances at a regional level?

I had to do the hard yards in the premiership learning a lot game by game and keep going and doing the best I possibly could. The environments in the Scarlets and Glasgow helped but playing week in week out in a tough league has helped me get where I am today.

Are there any games that stick in your mind when you have donned the Quins shirt?

Yes Swansea at home middle of winter and the hail and rain came down hard boys where that cold it was straight off the pitch in to the showers in our kit, but I suppose that would be good acclimatisation for the Scottish weather!

Finally, what advice would you give any current player whether its mini and junior or in fact a young senior player?

Just keep pushing for what you want it won’t all be straight forward you will be told no and put down a lot in your time it’s how you bounce back and keep going.

Thank you Javan for your time and we wish you all the best in the upcoming games and hope you  get a cap and that sometime in the future we will see you in a Quins shirt again. Below are some of the images we have captured during your time with us. Thanks to Dan Minto Photography for the photos.