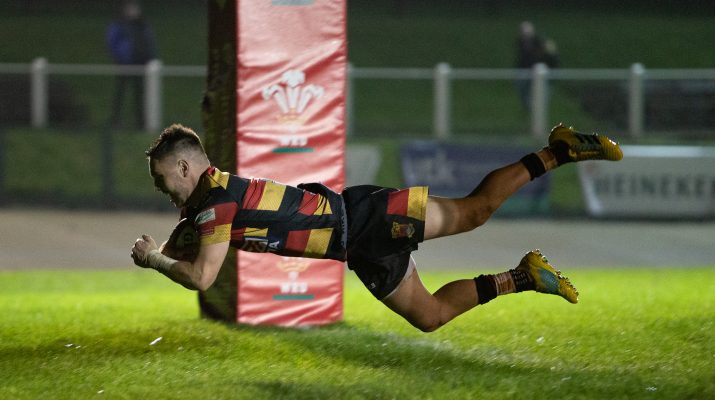 EBBW Vale clinched a 22-8 win over Carmarthen Quins in a gritty battle in front of the BBC Wales cameras, at Eugene Cross Park on a cold Friday night.

Their first scoring chance came in the fifth minute. Rhys Jones’ kick was aimed for either Josh Lewis or Dafydd Howells, but both mishandled the already slippery ball.

However the referee had blown for a foul on Jones by Lee Taylor, an action that earned the Quins forward ten minutes in the bin.

Ebbw Vale couldn’t take advantage of the extra man, in fact it was the visitors who took a 12th minute lead via an Aled Thomas penalty, and just before Taylor returned to the field, Toby Fricker was denied a try after Ebbw’s Lee Taylor did well to hold him up over the line.

It looked like that Ebbw Vale had taken the lead on 27 minutes when a length of the field move culminated in Fricker finding a gap and diving over. However, after a consultation with the TMO, it was disallowed after Ross Jones was judged to have made a tip tackle in the build-up. So instead of being perhaps 7-3 up, Ebbw were still 3-0 down and had Jones in the bin to boot.

Ebbw Vale had to settle for a penalty goal instead, Rhys Jones kicking from an angle to level the scores.

Jones had another go to try to give his side an interval lead, an ambitious attempt from 55 metres out that was on target but didn’t have the distance.

But deep into added on time, Fricker finally got his try, burrowing his way over with Jones converting putting the score to 10-3 at the break.

They extended their advantage 12 minutes into the second half. It was an excellent passing move that ended in Dafydd Howells diving over in the corner and Jones converting well.

Carmarthen kept on attacking, desperately looking for a way back into the game, but each time they were met with a blanket defence as Ebbw forced them into errors.

Eventually they were rewarded. Jac Price, who had only been on the field for two minutes, scoring the try, with the conversion going wide.

But the home side cemented the win in the final minutes with a Rhys Jones penalty.