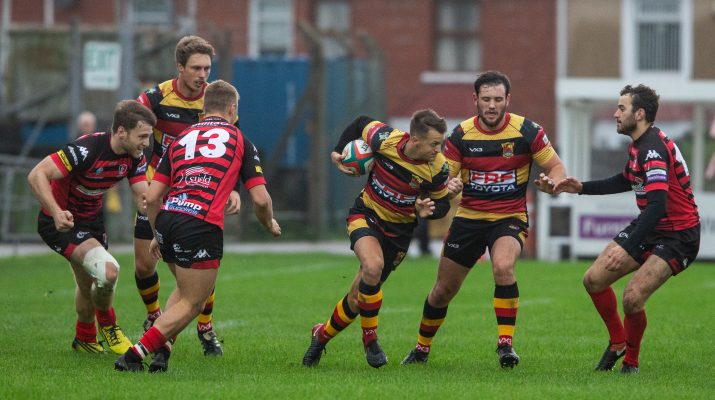 Having left Carmarthen in turmoil weather wise, the Talbot Ground was comparatively calm by comparison.

The Quins faced a wizard side who had recently beaten Merthyr ,Pontypridd and Llandovery  in winning five out of their opening six matches, presenting a daunting task for the Quins. Seven changes from the Llanelli defeat, might indicate to some, that there was some indifference.

Nothing was further from the truth as this Quins side were unlucky not to come away with the spoils, as they matched the home sides set piece, and their line out trio was never mastered,  The match Programme tried to deny the referee and one linesman had any connection with Aberavon, but in a match where the Quins , except for the first half try conversion, did not have ONE kickable penalty award.

Many Quins supporters cannot remember this ever happening. Their set piece settled quickly and their line was soon on top, so the Quins play was confident and their handling safe, but it was both defenses that were in command for most of the half, giving neither sides supporters much to enthuse over.

Near the interval, a Quins period of pressure, took play into into Wizards 22, and slick passing by all the Quins backs gave Dylan Morgans the chanced he rarely misses  to crash over for the opening score. The conversion sailed narrowly wide.

With this lead and the elements in the second period, a shock was on the cards. Alas the whistle ruined  this. On the hour mark, the Quins had a player yellow carded.  A home penalty advantage continued until it was halted near the left touch line, and the referee took play back to a position 25 yards further up field than the original offence.The home side went for touch near the Quins line and from the ensuing line out, yet another  penalty to the home side, saw  a quick tap and Steff Andrews was able to scramble over for James Garland to convert and give the Wizards the lead.

The Quins response was immediate and but for a fumbled pass a score was missed. More suspect decisions kept play in the middle of the pitch and gave the Quins enthusiasm little chance of cashing in on their endeavors. Another home penalty was converted by Garland but the 5 point difference was never going to be enough to sit back on and the Quins kept plugging away up to whistle to gain a losing bonus point.

Using all their subs, it was accredit to these players that they were able to subdue any attacks the home side could muster and they could easily have snatched it at the end.

Next week RGC from North Wales are our quests at the Park with a 2.30 p.m Kick Off. so come along and support your Players