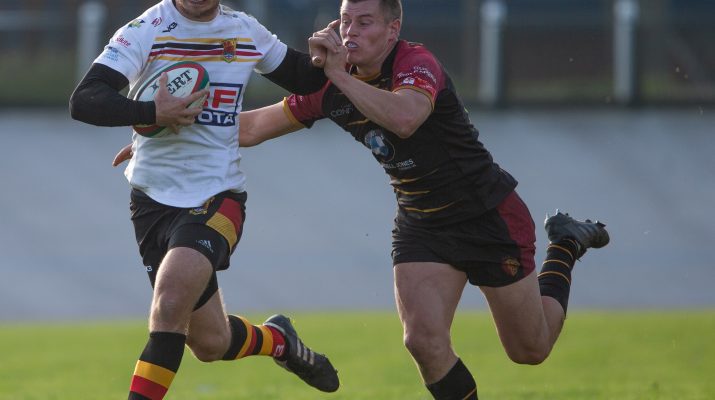 Fielding the same starting line up as last week, the Quins put in their best performance  to date, to out gun and out play their North Walian visitors.

The Park was at its immaculate best and the playing conditions were ideal for both sides expansive approach. The Quins pack were quick to settle and never took a backward step all afternoon and took the line honours by winning their own throw and seriously disrupting the gogs advantage. Both sets of backs had early touches and pace was going to be the order of the day, testing either sides defence. What has been a feature of the Quins play this season is their ferocious tackling, and ability to counter attack from the results of this. Elis Lloyd was in his element and an early turnover won a penalty for Aled Thomas to register the first score with a 30 meter penalty.

The Gogs were always dangerous when in possession and from a break in their own half, a chip ahead resulted in a very lucky bounce being gathered by former Quins star, Dion Jones to race over under the posts. Billy McBride converted. From the restart the well-placed kick enabled to the Quins back row to win possession and their powerful surge took them into the Vicarage corner for Dale Ford to touch down for an unconverted try and regain the lead.

A 25 minute penalty gave Billy McBride the chance to win back the lead. Again the restart saw the Quins gather and charge up to the visitors line, only to be thwarted by a resolute defence and the danger passed.

The Quins power play took them up to the visitors line, and from the resulting set piece, all expected a scrum drive but Liam Davies fooled the Gogs cover, and spread the ball to his right for his backs to move quick ball out to Dale Ford who darted over in the corner for a well taken try. Aled Thomas converted from the touch line changing the lead for the fifth time, giving the half time advantage to the Quins.

The interval talk had its desired effect as the Quins went on the offensive, and from a Gog line out throw in, Torin Myhill was quick to pounce on their mistake and burst into the 22 to give Shaun Jones a well timed pass and his power and pace took him the 22 meters to go over for a cracking try. Aled Thomas increased the Quins lead with his third kick.

More Quins dominance kept play in the Visitors half and the Gogs found it difficult to handle. Aled Thomas put over his forth successful kick. With the forth bonus point try in sight the Quins stepped up their pressure and with injury time approaching a 50 meter touch finder saw a line out 5 meters out. The Quins line again made it difficult for the visitors to control and a Quins drive gave Hadyn Pugh the chance to crash over for a true captains score. Alad Thomas was on target with his 5th success.

An unfortunate injury halted play for several minutes and saw Dion Jones being stretchered off. The Quins had taken their foot off the gas and this let the visitors in for Jordon Scott and Cam Davies to score what can only be described as consolation tries, and after 30 minutes of extra time the whistle ended the match.

This well deserved five points made up for the disappointment of the Aberavon result and keeps the Quins in the top half of the Premier Division.

It would have been difficult to pick a Man of the Match as this was truly a team effort as the whole squad played a part in this victory, and they look forward to next weeks encounter with Bridgend at the Park with a 1.30 p.m. Kick off.

Following our early kick off the next generation of Carmarthen Quins Youth take the field in their Cup match against Llanelli Wanderers Youth Kick Off 4.30pm