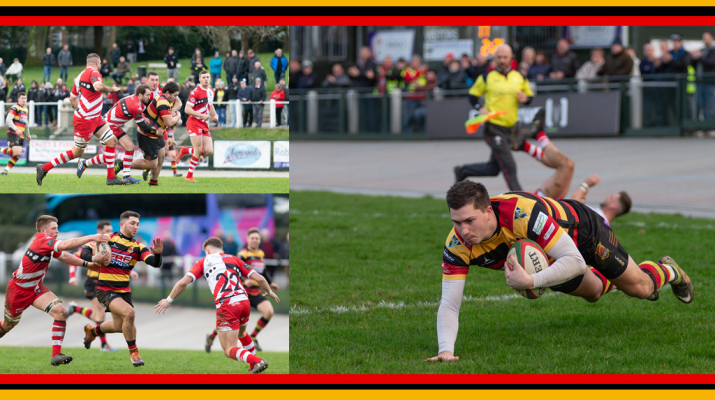 The Quins kept up their record of more victories over Ponty, than any other Premier team since they have been in the Premier Division. They also keep their unbeaten at home record for this season, going into the next decade.

In front of the largest crowd of  the season and after a sluggish opening half hour, the Quins settled down to take control and consolidate their second place in the Division with a fully deserved victory.

In the first few minutes both sides tested the playing conditions and the visitors had the chance to go ahead but failed to capitalise with a missed penalty. From a break out of defence the visitors raced up field and Alec Webber kicked in field for a suspiciously off side Joel Raikes to run onto, to touch down and for Ben Jones to convert.

On the 17 minute Mark Jones increased the visitors lead with a 40 metre penalty. Two minutes later, Steffan Marshall steadied things with a 25 metre penalty for the Quins. After the Quins had driven play up to the Ponty line, a Ponty maul gave Ben Jones the chance to kick cross field for wing Dale Stuckley to gather still in side his own half and to make the 50 metres to cross for his sides second try. Jones converted giving a false position of events.

Back came the Quins and their pack to take control of both tight and loose. After 35 minutes Steff Marshall pulled three points back with his second penalty. Minutes later, a Quins passing bout with several players involved, made 50 metres for Curtis Ford to cross for a brilliant try and for Steff Marshall to end the half with the conversion, bringing the Quins right back in the game.

The four point difference was now well within the home sides sights and they made their forward dominance pay, even after Jones had increased the Ponty lead with a penalty. The Quins line out catch and drive assault was having its effect and the Ponty pack had no answer.

after 47 minutes Haydn Pugh took a clean line out and the drive powered over for Gareth Rees to be credited with the try. Marshall levelled matters with the kick and this left an interesting half hour.

More Quins pressing kept play in the Ponty 22 and only desperate defending kept them in the game. A Quins penalty near the Ponty line, gave Gareth Rees the chance to tap and go and to find Ed Siggery in close attendance, who used all his strength to crash over for a well taken and deserved try near the posts – Steff Marshall added the points.

This lead was never going to be given away and the Quins eight used all their experience to get to the final whistle and the League points. In a League encounter that saw the narrow defeat at Sardis Road earlier… revenge was certainly sweet.

The whole squad is now gelling into a powerful unit and with the 24 players used, it is a credit to the coaching staff who continue to encourage the type of play that the supporters enjoy. Next Saturday they travel to Llanelli for a League match.