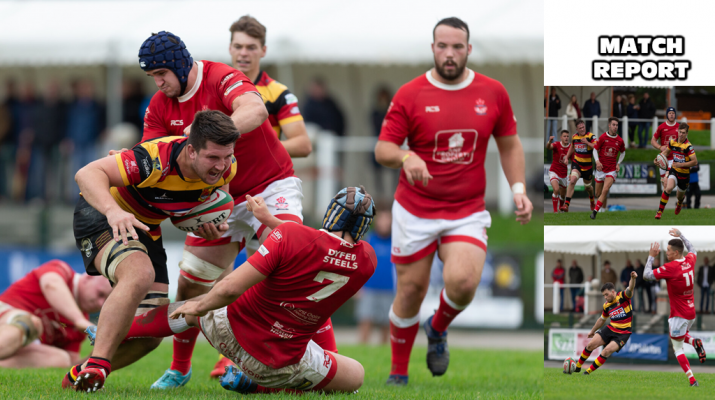 Considering the atrocious weather of the previous week, the conditions in the Park were excellent for the first Quins home game of the season. However, it was Llanelli who started the brighter taking the game to the home side early on. With only seven minutes on the clock, Aaron Grabham touched down in the corner for an unconverted try.

Carmarthen’s reply was almost immediate when Ben Leung charged down a kick, forced a defender into touch and from this, eventually, a perfectly executed rolling maul allowed Torin Myhill to cross for an unconverted try. Then, within ten minutes Leung was yellow carded for taking a man out off the ball and during this time, Ioan Hughes kicked two penalties to extend the Llanelli lead to six points.

The Quins seemed spurred into action and some classy passing moves were carried out only to be stopped illegally, giving rise to a series of penalties. Into the last ten minutes of the first half the home side were awarded a penalty try after illegally being denied a try from a very effective rolling maul. Chris Long, the Llanelli lock, was then yellow carded and Jac Wilson finished off the half with a penalty to give Carmarthen a 15 – 11 lead.

It was the Quins who came out flying in the second half and, almost from the restart, Nick Reynolds broke open the visitor’s defence. Quick hands out to Leon Randall on the wing allowed him to run around under the posts for a try and an easy conversion for Jac Wilson. For the next fifteen minutes it was all Carmarthen, but they only managed two further penalties from the boot of Wilson. Llanelli now began to claw their way back into the game and eventually broke their opponents defence allowing Chris Long to dive over between the posts. Hughes easily added the extras.

The last quarter was a little disappointing as there were no further scores, the rain began to hammer down, the kicking game was ineffectual from both sides and handling errors prevented too much cohesive play. Then as the end of the game approached a Llanelli player unfortunately suffered a serious injury. When play restarted the game just fizzled out in the rain.

All in all, Carmarthen Quins should be pleased with this 28 – 18 victory especially considering the disjointed start to the season. Half-way through October and this was only the third match for the home side.