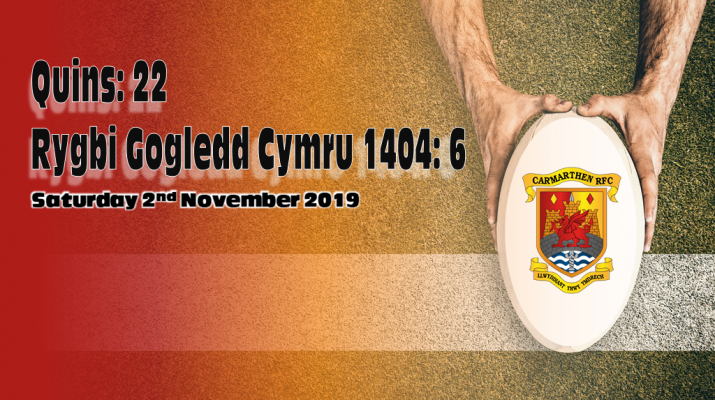 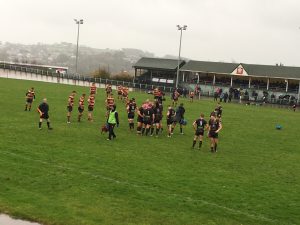 Despite the horrible weather conditions, the Park was in tremendous nick and even allowed passing movements that thwarted the elements.

With 5 changes from the Swansea match, the side looked confident and welcomed back the Scarlet  contingent. The rain swept across the pitch throughout and it was a credit to both sides that their attacking flair was encouraged and appreciated by the brave supporters.

The opening ten minutes saw both sides try to adapt to the conditions and after 13 minutes Billy Mcbride slotted over a wind assisted 40 metre penalty. The Quins line out was quick to settle and after 17 minutes Jac Wilson levelled matters with a 30 metre penalty.

The ‘gogs’ were unable to contain the Quins forward control, with play settled in the visitors 22 for long periods. After 25 minutes another line control thanks to Haydn Pugh, gave the home side the chance to use their supremacy to power a full 20 metres for Josh Helps to crash over and Jac Wilson to add the conversion. From a clumsy late tackle the visitors were able to gain their second penalty. More attacking play by the home side kept play in the visitors half and from a touch kick by Leon Randall to ten meters from the visitors line, the line out was won by the Quins and once again their control saw Dominic Booth power over for a well taken try, the conversion sailed wide. The sides changed ends with Quins in a well earned 15 – 6 lead.

With the elements in their favour, a victory was on the cards, and astute kicking kept play in the RGC half. Another controlled line out saw the Quins eight do what they do best, and Dom Booth secured his second try, Jac Wilson obliged with the conversion, with 30 minutes remaining a bonus point was on the cards, but to the visitors credit their defence although at full stretch, was able to stem the tide. The slippery playing conditions took over and error after error was the order of the day. The Quins eight are gelling into a formidable unit and their bench players are indeed formidable back up.

They failed to secure a bonus point but move up to 6th in the table. Next week they return to Cup duty away at  Beddau when a win will see them in the quarter final.

The boys celebrated their win in scary style…. 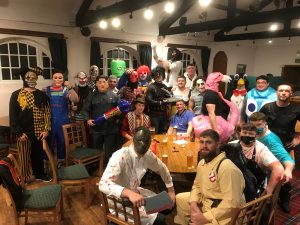