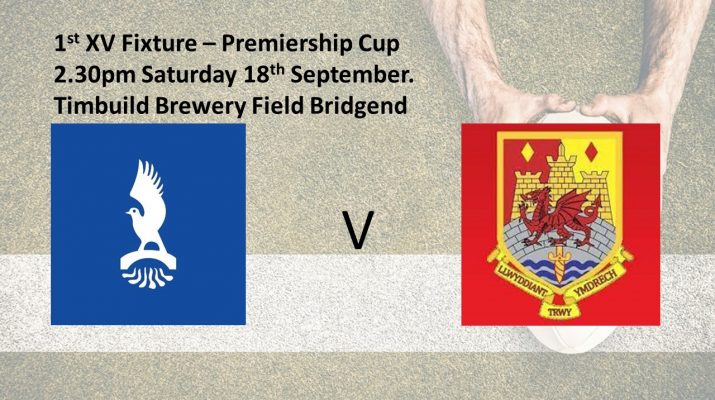 In what has felt like the longest off and pre season ever imaginable the Quins preparations are all complete and we look forward to setting out in the Premiership Cup this coming Saturday 18th September.

It is of course fitting that our last competitive fixture was of course Bridgend away on 7th March 2020 some 560 days apart! Of course we know the ways of the world have changed but there is nothing better to our players and supporters than a league or cup game and the Quins are chomping at the bit to get going.

Looking back to the 2019/2020 season the Quins as we know were flying high and it was an indifferent season for Bridgend however, for the Ravens if lady luck had smiles on them then more results would have gone their way. The Quins were victors in both games that season with a comprehensive 38 pts to 8pts home victory but a much closer 20pts to 14pts victory that required a last minute try and conversion to take the victory.

Looking further back we managed to catch up with former Quins Centre  Darren Simpson who whilst playing 174 games for the Quins 1sts also turned out for Bridgend. We asked Darren if he had any memories of games against Bridgend. Darren said “As always in the Premiership there were never any easy games and that was always the case with Bridgend, always a tough place to go and difficult to play against as they always looked to open the game up. I remember two games particularly back in the 2003/2004 season. We first played them in September 2003 and it was a grand afternoon for me as I bagged two tries. We raced into a big lead at half time but maybe took our foot off the gas and after being 29 nil up we managed to repel a huge fight back but manged to win 32-19. Other scorers in that game were second row Paul Arnold and prop Richard “Dickie” Davies with Giles Thomas banging over 3 conversions and two penalties Later that season the game was totally different in the park where we just sneaked the game 18-13.”

Darren continued ” I also remember them coming to play us in the cup in February 2002 and the centre partnership that day for Bridgend was future Welsh Captain Gareth Thomas and again Dafydd James but myself and fellow centre Emyr Jones stopped the formidable duo from making a break in the centre, it was unfortunate for us that they had the flying Fijian Aisea Havili on the wing and he raced in for three fine tries, but we were proud of our performance that day against a first class club”.

When asked how he thought Saturday’s game would go Darren said “Its just as difficult to call, its been a long time since the two teams played competitively and both have had relatively successful pre-seasons and its the old adage that the team who wants it more on the day will get the W, although I played for Bridgend as a Carmarthen boy (Park Hall born and bred) I have to back my home town and wish them the best of luck”.
Another game that sticks in the memory was way back in 1995 in the old SWALEC Cup. The Quins were playing their rugby in the old national league Division 4 and of course Bridgend were at the top league possible and this was in the days of David v Goliath cup clashes where the smaller clubs had their chance against the “big boys” in front of a huge crowd at the park the Quins didn’t take a backward step and scored four tries from Anthony Dragone, Nick Jackson, Barrie Thomas and included an outrageous try by outside half Kiley Jones against a side that included Welsh Internationals Rob Howley, Dafydd James and Glen Webb in their back line. The kicking of Anthony Dragone took the scores level at 25 all but a very late penalty gave Bridgend the victory.
Head to Head the Quins have 19 victories and Bridgend 12 with the Quins scoring 739 points including 88 tries and Bridgend 623 points and 41 tries. Of course we hope the Quins can add to all these stats this coming Saturday.
The Quins squad have stepped up their preparations this week and under the captaincy of Lee Taylor we hope this is the start of a successful season albeit it looks very different from other seasons but we are only to happy to be able shout on the boys wearing the Cardinal Amber and Black of the Quins.
The squad selected for the game is below. 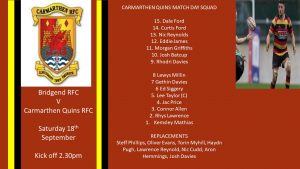