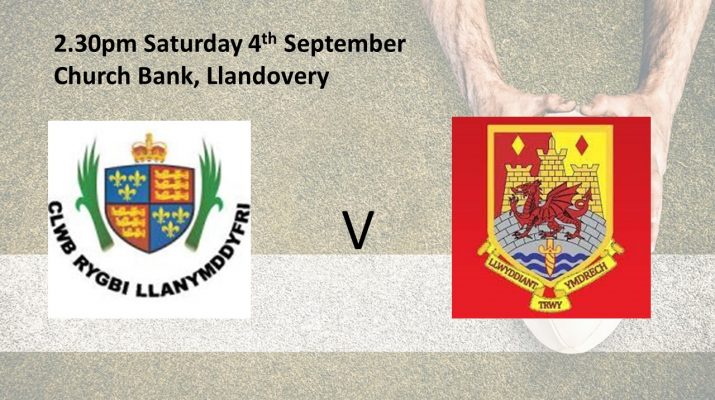 Saturday 4th September sees a welcome visit to Church Bank, Llandovery for our 1 st XV as pre-season preparations continue. In what is always a keenly fought contest this will be a ‘friendly’ in name only as both sides will look to set their marker down for the coming season, with both coaching teams eager to see the competitiveness in their squads for the starting places for the start of the season playing quality opposition.

Head to Head figures make some interesting reading, the teams have played each other many times with Llandovery coming out on top 32 times and the Quins 25 times. In those games Llandovery have scored
1185 points and the Quins 1144 which is testament to how tight these games generally are. The Quins do lead the try count on 129 compared to Llandovery’s 107. But statistics go out the window on match days!

In the ill fated season of 2019/2020 the results saw a 13 all draw in the traditional Christmas fixture at Llandovery and a narrow 14-12 victory for Llandovery in the reverse fixture at the park.

The Quins will be looking to continue their (so far) successful pre-season by backing up two previous victories at home to Aberystwyth and away to Chinnor. Team Manager Steff Thomas stated “ This is another step up for our preparation and vital pitch time for the wider squad. We have got a few bumps in the squad which we are looking after at this early stage of the season. I am sure a warm welcome awaits us and for some of the younger members of the squad it will be a great experience.”

Steff continued “ We know their head coach well (Euros Evans, former Quins hooker) and he will have prepared his side meticulously and we will have to counter that. Whatever the result on Saturday it is for both sides another step towards full competitive rugby”.

With a final pre-season game scheduled for the 11 th September at home to Cardiff the Quins machine is raring to go and get back out there doing what they love and what you the supporters want to see.

This weekend also sees the return of mini and junior rugby with fixtures starting for a first ever game for our under 7’s up  and games to under 16’s and also a first league game for the newly age graded under 18 youth side who host Lampeter in Abergwili.