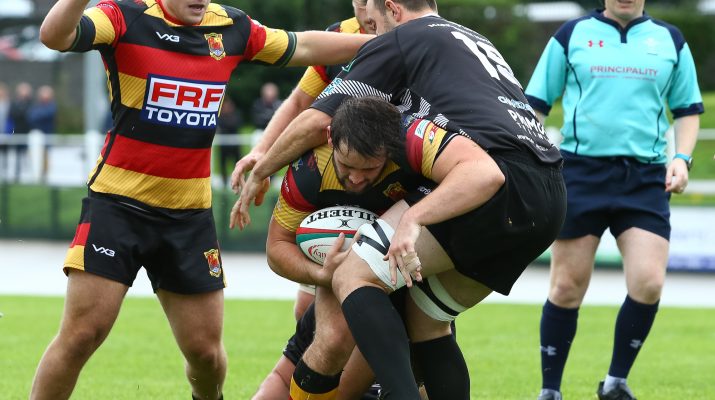 Making two changes from last weeks debacle, the Quins well and truly buried that performance with a 6 try feast. From the kick off into a strong wind, Elis Lloyd was able to gather and take play up to the Keys line. His pack were soon behind him and Ed Siggery was able to power over for an opening minute try, Aled Thomas converted.

From the restart the Quins were able to control their possession and again take play deep in the visitors  22 for Elis Lloyd to crash over, Aled Thomas was on hand with the conversion. The Keys were able to use the strong wind to get out of trouble, but this played into the Quins game plan and from a brilliant counter attack, a move that took them the length  of the field, Dale Ford went over in the Vicarage corner. Aled Thomas put the kick over from the touch line  to complete 3 tries in 13 minutes.

The visitors had no answer to this Quins approach, and their line out dominance and solid scrummaging, gave the Keys very little opportunity to mount any threat. From this they were able counter attack and keep play in the visitors  half despite the strong wind. On the half hour, Keys managed to take play into the Quins half and a clever kick ahead gave G. Ellis the chance to touch down under the posts. Jason Tovey converted.

The Quins were able to use the control they were winning and from yet another counter attack, Liam Davies was on the end of a six  man handling move to go over for the bonus point score and Aled Thomas again did the honours with the conversion, all before the interval. With the elements at their back, a cricket score was envisaged, and as early as the second minute, Aled Thomas slotted over a 35 meter penalty, to restore a four score lead.

A powerful surge upfield led to a scrum under the posts. From this possession the Keys defence  were mesmerised and slick passing to the left gave wing Dylan Morgans plenty of space to cross wide out, for an unconverted try. The Quins were left a little disrupted due substitutions and this gave the Keys pack the chance to use their renewed scrummaging advantage to gain a penalty try. This seemed to give new life to the visitors and the Quins took their foot of the gas, and this enabled Leon Andrews   to steal over for his sides third try.

With the chance of a bonus point try on offer, and playing catch up rugby, the Quins lost concentration to let sub Taylor Hansen through for this added bonus to flatter the Keys score. Tovey took their score to 26 which seemed unlikely for most of the match.

This opening League victory restores the confidence to the squad and they look forward to next weeks match at Bargoed. This performance was down mainly to a team effort and it is hoped they will improve even more in the weeks ahead.