This Saturday will see the Quins hit the road to take on Pontypridd in the first Indigo Group Premiership League fixture. In fact this as we know is the first league fixture since March 2020. It will also be the first time to take on a side from the East in a meaningful encounter.

In the 2019/2020 season honours were shared with Ponty scraping a 20-17 win at home in Sardis Road and the Quins running out victors 27-20 in the park later that season.

Quins supporters will of course fondly remember two games against Pontypridd. One on 11th September 2004 where they travelled to Sardis Road and outscored their hosts 23-0 and secondly the Cup Semi Final in April 2009 that was played at Bridgend where the Quins came out with all guns blazing and blasted their way in to the final with a 41-12 victory much to the enjoyment of the travelling support. In between these games and since the results were always much closer with no quarter given by either side.

Pontypridd like the Quins have had an indifferent cup campaign and must beat RGC in a rearranged game in January to win the coveted 4th spot to qualify for the knockout stages.

This game will be a test for both sides who will be looking to kick off their league campaign with a W but as we know Sardis Road is not an easy place to go but the Quins have prepared well over the last two weeks and are chomping at the bit to get out on the field.

Your Match Day 23 Mighty Quins is: 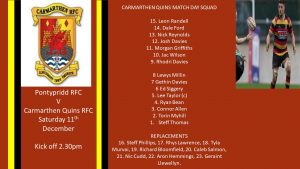