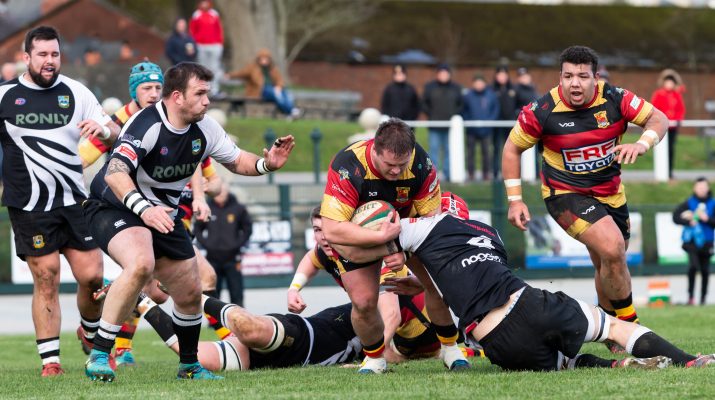 Due to the recent spate of bad weather, the Park was the only venue left in the Principality Premiership to survive. Having taken the honours away at Bedwas by just the one point, the Quins were keen to make it a double and a step nearer safety.

The Quins started on the front foot and moved the ball about at pace keeping their supporters on their toes on this bitterly cold afternoon. A 5th minute penalty gave Aled Thomas the chance to put the home side ahead and encouraged their players to keep the ball alive with attack being the watchword. After eleven minutes this approach backfired when an attempt to run the ball out of defence was intercepted giving wing Jordan Rees a clear run in under the posts, for Evan Lloyd to convert.

This just urged the Quins into keeping up their attacking style and Aled Thomas reduced the deficit with his second penalty midway through the half. The visitors were forced to pull out all the stops to defend desperately and after a patient build up, play was driven to near the  Bedwas line. A power drive after winning a line out was just stopped inches short and from another line out the Quins were determined not to be denied and their usual power play gave Shaun Jones the chance to touch down for Aled Thomas to regain the Quins lead.

Bedwas were quick to respond and this time it was the Quins defence who had to work overtime for next five minutes before the interval to keep their line intact. The visitors were rewarded for their efforts but missed two penalty attempts within minutes of each other but after 44 minutes  Evan Lloyd was on target to bring his side to within three points of the Quins total.

The Quins set piece and Line out were working well and gave the visitors little chance to threaten the Quins defence. From this line out control, the Quins were able to exploit a gap and after drawing the cover defence a well-timed pass to Gethin Davies saw him make the twenty meters to go over under the posts. Aled Thomas did the honours with the conversion.

Play was kept alive with some enterprising moves and credit to both defences the score line stayed quiet and with the eighty minutes nearly up the Bedwas skipper decided to take a pot a goal and gain a bonus point which was duly converted by Evan Lloyd.

The Quins response was immediate and after a powerful surge upfield from the restart, the reliable Dylan Morgans sliced through an overstretched defence to score a fine try. Aled Thomas conversion was the last touch of the match and the Quins took the league points and move up to 8th place and closer to survival.

The Quins will play five teams below them in the League in their remaining fixtures, so they have all to play for, but the bottom five Clubs face a tricky couple of months in their bid for a place in next seasons Premiership

The Quins travel  to Parc y Scarlets next Friday evening and take on Llanelli RFC who will be desperate to win in their bid to stay afloat, but the Quins will be all out to get revenge for the defeat at Home Kick off a Parc y Scarlets is at 7.15 pm.