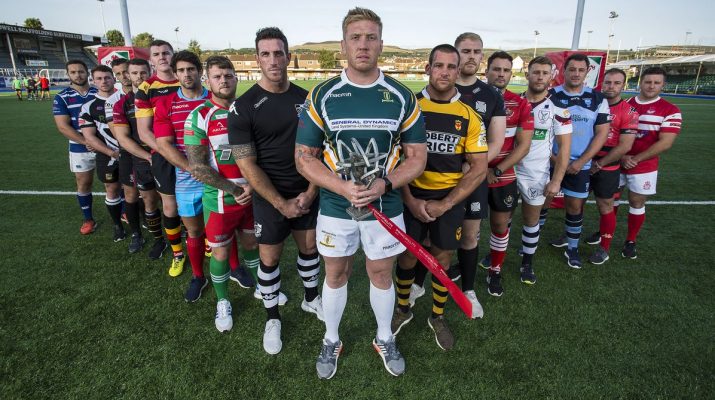 Merthyr head coach Dale McIntosh has laid down the gauntlet to his players – and the rest of the Principality Premiership sides – ‘let’s do our talking on the field and produce a brand of rugby to be proud of this season’.

McIntosh, who has guided the Ironmen to back-to-back Principality Premiership – and Cup – titles after gaining promotion to the top tier of Welsh club rugby two years ago, believes the Premiership coaches and players have a duty to produce an entertaining style of rugby to repay broadcasters BBC and S4C for investing in the league this season.

The former Pontypridd and Wales flanker said, “We as coaches and directors of clubs need to appreciate the investment the broadcasters have made in covering this level of rugby and entertaining the crowd needs to be one of our aims.

“It’s down to us coaches and players to produce a standard of rugby worthy of that commitment. If we can produce a good account of ourselves, I’m sure the clubs will see the value too with additional sponsors.

“There are a lot of nervous people in the Premiership at the moment, us included, with the added pressure of relegation at the end of the season, but it’s time to do the talking on the field and basically put up or shut up. We’ve all got a duty to the game and as clubs I believe our role is to provide the best possible standard of rugby for our level of the game. Whether your level is grassroots club, Premiership or professional, all you can do is be the best you can possibly be. I hope we can inspire some Merthyr youngsters to put on the Merthyr jersey one day and represent their town.”

With the Principality Premiership reducing in size from 16 to 12 clubs next season, McIntosh is not underestimating Merthyr’s task as they attempt to hold onto their crown.

“Defending the title is going to be tougher this season,” added the New Zealand born Welsh international. “There are a lot of strong squads out there and whoever gets into their stride first will steal a march on the other challengers.

“We are all aiming for the top eight spots to avoid the relegation fight and a lot will depend on keeping your squad as healthy as possible. We’ve lost a few key players in the likes of Kristian Phillips and Ed Siggery but we’ve gained some good additions such as Jay Baker, Lewis Williams and Adam Thomas. I think we’ve got better balance up front and a backline to match anyone now. We have always tried to play expansive rugby when the time is right and we will definitely look to put some more width on our game this season.”

Merthyr begin their campaign at Cardiff Arms Park on Saturday before welcoming Bedwas to The Wern next weekend. Their first televised fixture is at Stadiwm Zipworld at the end of the month.

“We can’t wait to get started and you can’t get much better than a trip to the Arms Park to kick off the season. Cardiff have recruited strongly and will be guided well this season by half-backs Steff Jones and Martin Roberts.
“Bedwas at home will be interesting – they have a young squad this season but they beat us well at
The Wern in our last two home games against them so we won’t be taking them lightly. It will be fantastic to be part of a great Friday night occasion at RGC at the end of September. RGC will always provide tough opposition and their proud home crowd will give both teams a very warm welcome I’m sure.”

Head of Sport at BBC Cymru Wales Geoff Williams said: “Friday night rugby on the BBC has been a staple part of the sporting diet in Wales for many years, and armchair rugby fans will be delighted to see it continue. By securing these rights, fans will be able to continue to watch free-to-air rugby every week on BBC Cymru Wales as well the Scrum V highlights programme on Sunday evenings.

“The revamped Premiership will be an exciting competition that’s rooted in communities across Wales, and it has a strong following amongst rugby fans. This season, there is certain to be a significant amount of jeopardy and rivalry among the sides vying to top the league and BBC Wales will be there to bring our audiences all the drama from the touchline.”

S4C Sport Content Commissioner Sue Butler said: “Live Welsh club rugby has always been an important part of S4C’s sports output and we are delighted to be continuing our coverage of the Principality Premiership, this time in partnership with BBC Wales.”

WRU Group Chief Executive Martyn Phillips added, “Having the support of BBC Cymru Wales and S4C to show regular, live Principality Premiership rugby is a huge boost for the league, clubs, players and coaches involved. The Principality Premiership clubs are the pinnacle of Welsh club rugby. This is a significant change for the Premiership and an opportunity for reinvention and re-energising the competition. I look forward to an exciting and competitive season.”

Principality Building Society has extended its title sponsorship of the league and the WRU National Youth Leagues for the 2018/2019 season.

The member-owned organisation first lent its Welsh brand to the domestic league’s top division in 2005, and is now set to complete 14-seasons directly supporting the top division in Welsh club rugby, before standing down as title sponsor of the competition.

Julie-Ann Haines Chief Customer Officer at Principality Building Society said: “Principality has agreed to continue as the title sponsor of the Principality Premiership for one further season, which will also include sponsoring of the National Youth Leagues. We’ve had a great reaction from the local clubs for the support we have given them and it has been a pleasure to bring the emerging rugby community together.

“Our partnership with the WRU provides opportunities for people to enjoy life through sport and helps to create memorable experiences for our members and communities. Our clubs are an integral part of their local communities, inspiring young people to take up the game to improve their physical well-being, while socially uniting fans and volunteers to make the league such a success. It promises to be another great season – good luck to all 16 teams.”