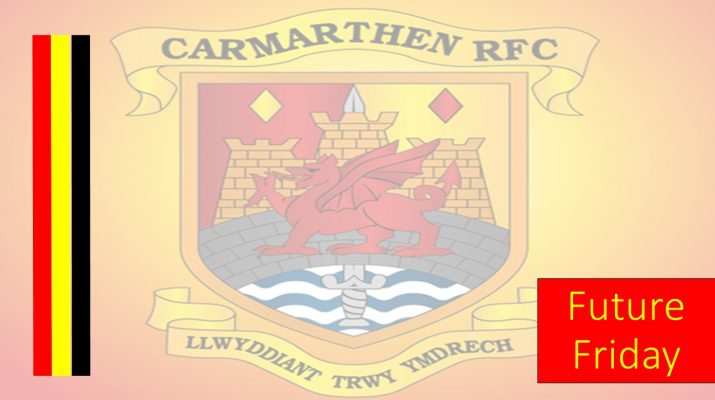 On a day when it has been announced by the Welsh Government that organised activities for Under 18s can begin again and the Welsh Rugby Union publishing its pathway to return to the game we love we thought it appropriate that we focus on some people who have the responsibility for developing the Quins of the future. We will over the coming weeks introduce you to the coaches from our Mini and Junior Section.

Our mini and junior section runs teams from Under 7’s up to Under 16’s and train and play their games (in normal times) at our base in Abergwili. With newly refurbished changing rooms and purpose built pavilion we are proud of what the club has achieved in developing facilities for our children. In addition to two full sized playing pitches the club invested in the field behind the pavilion and now proudly boasts four mini sized pitches for our younger players.

Outlook/Hopes for the future – I’m keen to support and help out the Club. Children have lost a year of sport due to COVID so it will be good to get them off the gadgets and devices and back into sport! It’s a great way for children to stay active, develop new skills and meet new friends. Hopefully, there will be some players who can go on to play for the Quins or the Scarlets in the future. The club has a rich history of developing talent so hopefully there will be more to follow in the future. A thriving junior section is required to facilitate that process though.

Why the Quins? – I enjoyed sport filled years as a child and was keen for my boy to have the same opportunities to learn about rugby, develop skills and make new friends in a local rugby club. The Club has fantastic facilities and it’s great to see the emphasis on having fun and developing skills in the junior section.

Favourite Rugby Memory – Unfortunately, I have no recollection of scoring Shane Williams like tries! However, there are lots of good memories. Some highlights include:Beating Cardiff Schools in Cardiff Arms Park in the final of the William Griffiths Cup. Unfortunately, it was played over two legs and we lost at home and on aggregate!

I had an opportunity to tour New Zealand and Australia for seven weeks to play against schools as a guest for St David’s Schools. The organiser managed to persuade a few Welsh schoolboys to join as well so we won 4 out of 6 games but had a sobering experience playing against Rotorua Boys High School. It was literally men against boys! Still, it was a great experience.

I played a senior game for Cardigan with Kevin Philips, Brian Williams, Ricky Evans and Adrian Varney who were local legends and my boyhood heroes. Another great rugby experience! 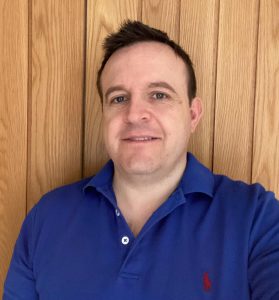 Playing History – Carmarthen and District Under 11s 1986/1987, one season Quins Youth, one game for Second XV, Two old boys games (second one resulted in a broken ankle after 2 minutes!).

Coaching/Rugby History – Started Coaching the Quins under 8s when I returned to Carmarthen in 2017 and happy continuing up the age groups.

Backroom staff for Quins 1st XV for many years before moving away.

Outlook/Hopes for the future – To continue to be associated with rugby and coach my sons age group as they move up ages. Keep up to date with the latest coaching methods by attending the relevant courses etc. Ensure that the team always plays the game in the spirit its meant to be played in and that the children always enjoy their time as a Quins player. For the Quins to remain a community focussed club with a strong and thriving junior section that acts as a conveyor belt to the youth, 1st XV and beyond.

Why the Quins? – Having been brought up from a young age at the Quins I have many fond memories and forged strong friendships over the years. On moving back to Carmarthen after 12 years away there was only one club my son wanted to play for and it wasn’t from any pressure from me but because in his own words “Its Grampas Club I don’t want to play anywhere else” The facilities that the club has developed for all users is second to none particularly the specific mini pitches which are the envy of many a club when they come to visit.

Rugby is a sport where you cannot help but have memories and there are so many so I will pick 3.

Scoring a try for the Second XV when I was 15 years old. I  went to watch the game against Mynyddygarreg and the Quins only had 13 players after coming out of the clubhouse someone said get in the photo Neil to make up the numbers. Roger “Cecil” Rees shouted “give him my spare boots he can play”. Steff Thomas picked up at the base of a scrum five yards out drew the winger passed to me and I dived over to score a try. Cecil still says it was his boots who made it.

Second memory was team manager of Llantwit Major in the 2013/2014 season where the club got to Swalec Bowl final where we took over 1000 supporters from the small town of Llantwit Major, a great occasion even though Llantwit narrowly lost 13 – 9 to Clwb Rygbi Cymraeg Caerdydd.

Thirdly the involvement I had with the Quins 1st XV, it took me to grounds where I had been as a youngster in the stands and now was in the changing rooms and on the touchlines and with a squad of players and management who epitomised everything about rugby and looked after each other and represented the club so well. 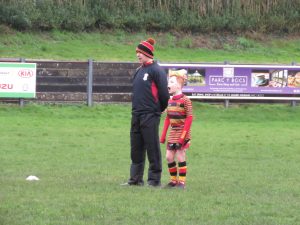 Playing History – Carmarthen and District Under 11s 1985/1986, Two seasons Nantgaredig Under 16s, Three seasons playing for Crymych 1sts and 2nds, 96-99. One game for Waikaka White stars, Southland, NZ (More of a drinking session than a game!!)

Coaching/Rugby History – Started Coaching the Quins under 7s as an assistant coach when Grant asked for some help coaching the 7’s and 8’s on the Friday night, two training sessions later I was head coach for the under 7’s!! And I have continued to coach the same boys/girls ever since!

Outlook/Hopes for the future – Much the same as what Neil has said above but definitely strive to be the best coach I can for the players and the club.

Why the Quins? – Although I never played for the Quins I always knew that they were the biggest team in Carmarthen. When Guto my eldest started to play his friends were going to the Quins so he wanted to as well and we have never looked back.  So when Garan, my youngest, started to play at under 7’s and Grant asked for an assistant it was an opportunity for me to give something back to the club which had given so much to us already and the club has continued to do this ever since.

Favourite Rugby Memory – Many favourite memories, they range from all the friends you have made over the years be it playing, supporting or coaching, and the different things that have been accomplished over the years.

Being part of the Crymych Squad that got promoted through the WRU leagues.

Watching both Guto and Garan representing the District at under 11’s, for two seasons each, and Garan vice-captain for his final season.

Guto representing the District under 15’s for two seasons and being vice captain for his final season. Also watching him play for the district 15s at the Principality Stadium in the Bowl final.

Everything that both have achieved with the Quins, which is a lot fair play.

Biggest for Guto was being Captain and winning the Carmarthenshire cup at under 13’s, and then going on to play at Parc y Sgarlets.

For Garan (and me!) winning the Amman utd Tag Fest and having the Quins the first names on the shield!

We also reached the semi-final of the plate before Covid struck and would probably have reached the final with the way we were playing, especially after the way we played in the quarter final at the Park against Lampeter winning 52-0, happy days! 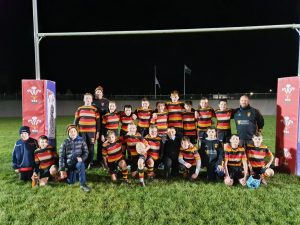