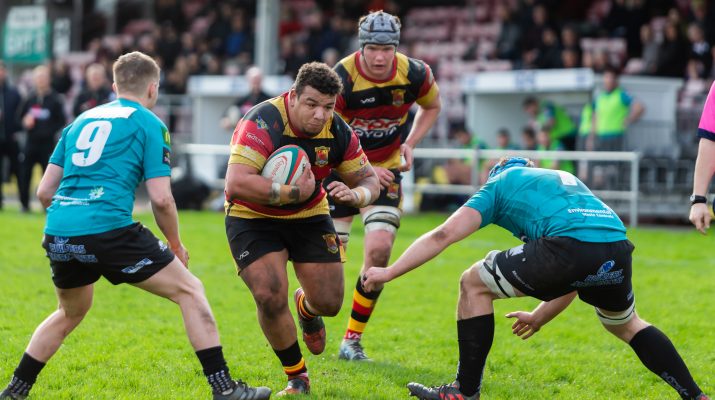 The final match of this season produced some of the most exciting moments of this long programme.

There were four changes from the Llandovery match and the Spring weather gave both players and supporters every hope of an entertaining encounter and the men on the pitch certainly did their best to oblige.  From the kick off, the pace of the match was  lively and accurate and play was from end to end with the Quins looking particularly dangerous, and their efforts were rewarded early when quick passing and clever running saw Nick Reynolds slice through a gap shaking off two tackles to cross near the posts. Jac Wilson added the points.

Mid way through the half and after several attacking periods by both sides a series of power phases took the Iron men  up ton the Quins line and Ben Murphy was credited with the touch down. Matthew Jarvis converted to level matters.Both sets of supporters were kept on their toes with skilful attacking, solid defending and accurate kicking and it was on the half hour mark that Merthyr took advantage of a lucky bounce and a quick counter attack that gave wing Terry Gee the chance to race through for the second try. Jarvis converted.

It was  followed by another series of Merthyr power play that led to try number three from skipper Craig Locke for Jarvis to convert. It was a full 36 minutes before the first set piece which was controlled by the Quins eight and this skill was to be repeated for the whole of the match and was a credit to their young pack and augers well for the seasons to come. With the interval looming the visitors again took advantage of a fortunate bounce which led to wing  Teri Gee crossing for his second try and the bonus point score.

The interval team talk, not for the first time this season, saw the Quins mount a dangerous attack and the ever alert Nick Reynolds darted through a mesmerised defence for his second try which Jac Wilson converted. More enterprising play by both sided thrilled the crowd and the expert handling of prop Javan Sebastian was of a very high standard and many of his charges gained valuable ground for the Quins. The experience of the Iron Men once again paid off and they were awarded a penalty try after a set of mauls near the Quins line.

The Quins refused to lie down and their set piece and line out control often had the Methyr side at full stretch for long periods and  their hard work was capitalised on when the reliable strong running of Dylan Morgans gave him the chance to shake off several defenders and cross for the Quins third try Wilson slotted the conversion but Merthyr rounded off a a fine afternoons work with an Adam Hoskins try.

This Quins performance was  given full credit from the Chief, Merthyr’s Coach, The experience gained this season will see the squad in good spirits for next seasons new plans devised by the WRU.