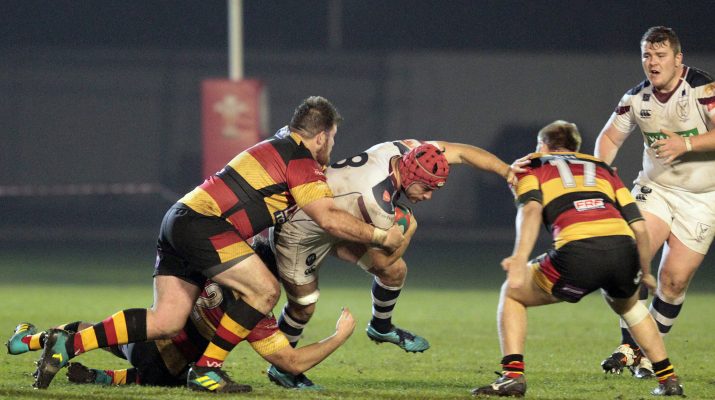 Having lead for most of the match, the second half saw a series of mystery decisions by officials and players, and a denied try at the death, let Swansea in for a lucky four points. Early Quins pressure was rewarded when after a forward surge, Torin Myhill was credited with the score for Steff Marshall to convert. Almost from the restart, The St.Helens outfit were awarded a penalty for Steff Williams to claw three points back. Again from the Quins restart, Swansea’s indiscipline gave Steff Marshall the chance to increase his side’s lead with an 8th min penalty.A series of Quins power drives kept play in the home half and only desperate defence prevented a score. A Swansea raid into the Quins 22 won them a penalty and from a quick tap and go the Quins were caught out and let T. HAND through to score an easy try. Williams levelled the score with the conversion.The Quins were able to win and keep most of the ball only to be denied with some sloppy passing and decision making, and on the half hour mark,power play saw the referee award the Quins a penalty try and another seven points. The home side were awarded a penalty for Williams to convert to see the sides change round with the Quins 17 points to 10 ahead.

Swansea had the use of the wind in the second period but failed to dent the Quins defence, More tight play gave the supporters little to enthuse about right up to the 75th min when from a Swansea catch and drive line out, The Quins were caught napping and the home side darted through to score a fortunate try which went unconverted but gave them a fortunate lead.Another home penalty meant that the Quins had to go for a try, and they pilled on the pressure and from what appeared to be a Quins try the spontaneous reaction of the Quins pack was dashed when the referee failed to see what had happened and blew for time to see a travesty and the Quins could only come away with a losing bonus point which dropped them to 5th place in theLeague when a victory would have taken then up to second spot. The Quins paid the price for not taking the chances on offer and must be far more clinical in future.

Next up is an away trip to Ebbw Vale in Friday 23rd November – kick off 7:15pm