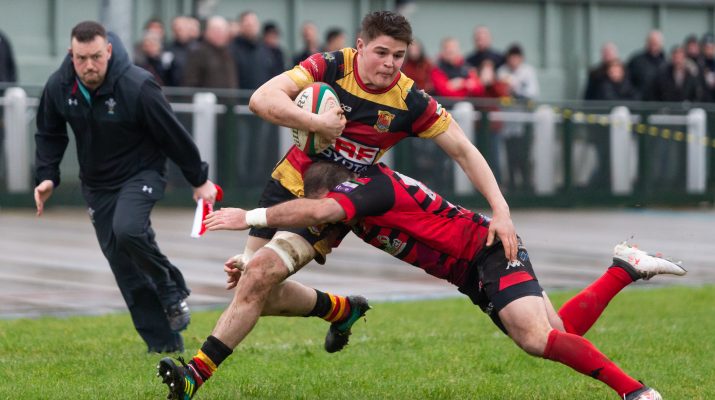 Clubs that play in the Premier Division have earned the right to expect fair and competent Officials. Unfortunately, this was not the case in this match. His lack of ability spilled over to the players, and this caused a hesitant approach resulting in both teams playing well below their expectancy and a low scoring lethargic performance did little to enthuse either sets of supporters.

Both sides normal expansive style was curtailed by strange decisions and many mistakes were made. A Quins attack was charged down in the Wizards 22 and play was quickly taken into the Home 22 and only desperate defence saved the day. After 17 minutes a mystery decision gave James Garland the chance to open the scoring with a 25-meter penalty. Back came the Quins and when play was broken up near the visitors line a clearance kick was wind assisted and play was once again in the Quins 22. This was defended and cleared only to see a Quins attack break down and yet another clearance was taken into the Quins 22 and up stepped Garland to land his second penalty.

A series of aimless kicking followed and when a Quins power play drove them into the Vicarage corner, the Quins line out promised everything only to see a ‘not straight’ throw end the half with the Wizards in front 0-6.

From the restart another Quins power play surge took play up to the visitor’s line and the Wizards were unable to cope with the strength of Ed Siggery who crashed over for Aled Thomas to give the home the lead with the conversion. Play was not allowed to flow with a series of interruptions by the Referee and this frustrated both sets of supporters as well as the players and this led to a disappointing half hour that was ended with yet another mystery decision and yes you have guessed it, an Aberavon penalty. Garland was on target to re take the lead and ultimately the match points and a sad reflection on the man in the middle.

Dylan Morgan played his 100th League match for the Quins and he continues to be a danger when ever in possession, this mile stone is within the realms of both Aled Thomas and Lee Taylor who stand on 99 League matches.

The next match will be away to RGC1404 on March 2nd and with Round 3 of the Six Nations come along to the Club to view the games on our ‘big’ screens. France take on Scotland @ 1415 followed by the BIG MATCH Wales v England @ 1645. Happy hour prices and Snacks available