QUINS SHOCK NOT – SO – SUPER SCARLETS 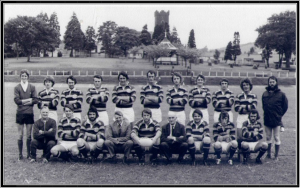 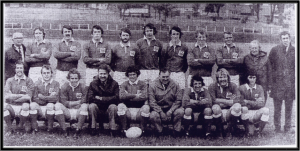 Look out West Wales, this is going to be the Quins year. This was the message which boomed out loud and clear from the Park on Monday after heroic Quins had come within a whisker of pulling off a sensational victory over the undisputed grand-masters of Welsh rugby.

No-one who witnessed this no-quarter centenary match will ever forget it. It was the night the Quins recaptured the glories of a forgotten age and showed that underneath their blood red jerseys, Llanelli are after all mere mortals and not just unbeatable machines in rugby kit. Quins refused to be over-awed by the wizards and their unflagging spirit and muscular football all but earned them victory or a deserved share of the spoils. Driving rain and swirling winds ensured that the game was contested up front and it was here that the Quins were at their strongest. The pack brilliantly led and marshalled by skipper and former Llanelli lock Brian Llewellyn, reached new heights as they clashed head-on with a burly Llanelli eight that included Welsh international Derek Quinnell, Roy Thomas, Hefin Jenkins and Gareth Jenkins.

In the battle that raged, the Quins astounded their supporters by unceremoniously pushing the Scarlets off the ball in several scrums. Their line-out and loose play showed vast improvement and they showed they were never afraid to mix it when the going got tough. The front row of Howard Iles, Clive Pugh and David Woodhead had dream games, while lock Jeff Williams followed his captain’s lead and gave 100 per cent effort. At the tail of the scrum, Ray Lewis, Phil Davies and Roger Walters played like men possessed and covered acres of ground as they chased and harassed the Llanelli back division.

Behind the scrum, inside-half Peter Evans controlled the game like a Spartan general and his fly-half Robert Taylor’s tactical kicking often had Llanelli on the back foot. Llan- elli had the better of the early exchanges but as soon as the Quins had shaken off their big match nerves, the picture changed drastically. The Scarlets were forced into mis- takes by razor-sharp tackling and even Wales ‘B’ centre Ray Gravelle could make no impression on a solid Quins defence in which Brian Furlong, Malcolm Thomas and Roger Richardson featured.

Admittedly there were times when the Quins became over-enthusiastic and referee Mr. Alan Bevan of Brynamman had to warn several players after Llanelli players had been laid-out by late tackles. The Quins shot into a shock 20th minute lead when Peter Evans capitalised on a Llanelli error, raced through and then chipped into the box for fly-half Robert Taylor to gather and dive over in the corner. Iles was off-target with the conversion. Spurred on by this score, the Quins plugged away relentlessly at Llanelli often put- ting them in real trouble. The Quins side got the better of the Scarlets and used massive touch-finders to work their way upfield. Several times they broke through but each time the visitors saved the day with hurried clearance kicks from fly-half Gareth Davies or full back Keri Coslett.

Just before half-time, Llanelli were firmly encamped in the Quins’ half and reduced arrears when fly-half Davies banged over a 30 yard penalty after a late tackle. After surviv- ing a barrage of attacks early in the second half, Quins again recovered to put pressure on the Scarlets. In one concerted attack they took play right up to the try line and were thwarted only by a touch-finder from Quinnell. As the game wore on, Llanelli did more of the attacking and in the 63rd minute Gareth Davies robbed Quins of victory with an- other 30 yard penalty.

By kind permission of the Carmarthen Journal