“A STEP BACK IN TIME”

If the weights of the two packs had been equal, there might have been a different story at Carmarthen Park on Tuesday night. As it was, the hefty Cardiff boys made their presence felt on their visit.

This game proved a true test for the local youth and although beaten, they were not disgraced – far from it. They put up one of the finest displays seen at the Park this season. In the first half, although playing against a fair heavier and taller pack with a strong wind in their faces, they prevented the visitors from scoring. The forwards’ activities could be described in the saying “like terriers at a badger.”

Also, in the first half, they worked the ball eight times from the twelve set scrums. In the second half, the position was reversed due to the strength of the visiting pack. Many supporters thought Carmarthen would pull it off with wind advantage, but it became obvious that they were tired.

The star-studded Cardiff threequarters showed their worth with sparkling runs, but desperate tackling by their opposite numbers prevented many likely looking scores. The premier faults of the home side were that they did not tackle low and stood too far away from their opponents during threequarter movements. In the keen duels of this sort, it is hard to find one player outstanding, but no one will quarrel with the statement that Ewan John, Carmarthen’s full back was that choice. He caught the ball from all angles and found touch cleverly against a strong wind.

Of their threequarters, little Digan Jones receives the bouquet for the fearless crash-tackling despite the fact that he was the one who took most punishment. I. Kopkins hooked the ball remarkably well; Denzil Jones & Brian Nodes harassed the Cardiff scrum half effectively. Lock forward Wyndham Thomas had his kicking boots on and used them well.

Of the Cardiff side, B. Mapstone (left centre) was the most dangerous. He possessed the weight and skill essential in a centre. Outside half R. J. Simons, Peter Owen (Captain), I. Williams and G. Halpern led the pack well.

Cardiff took the lead early on with a long-range penalty kick by Mapstone which was visibly helped by the wind. They held on to this lead until the interval. Carmarthen did not equalise until the second half was well under way when a kick from an angle on the “25” by Wyndham Thomas sailed over the posts. From then on, Cardiff dictated affairs and a breakthrough by J. Walsh (right centre) almost got through but a lose maul developed near the posts. The ball came back to Mapstone who charged over. Just afterwards, the final try came when L. Williams picked up a loose ball, made a dash, passed to R. F. Grindell (right wing) when menaced, and the latter went over in the corner.

After the match, both teams were entertained at the Dolwar Cafe. The chairman was Ald. William Edwards. Brief speeches were made by the Mayor of Carmarthen (Ald. Enoch Davies); Mr Ivor Williams, chairman of Cardiff Youth Rugby Club; Mr H. Evans, Secretary of the Welsh Youth Rugby Union and Ald. J. O. Morgans, president of Carmarthen RFC. A vote of thanks to the visiting team was proposed by Brian Nodes and the Cardiff captain Peter Owen responded.

There should be a bright future for Carmarthen RFC, possessing as they do one of the finest youth teams in West Wales. In four or five seasons from now, some of these boys will be fit to play in the senior side. They should graduate from the Youth side to the Second XV and be nursed along carefully until they are ready for service in the premier side. 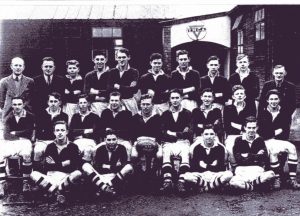 Attached to this report is a photograph of the 1949/50 Carmarthen Youth Rugby XV. I am reliably informed that this youth team was run independently from Carmarthen RFC by a few individuals who were keen to promote youth rugby in the town. It is highly likely the photograph was taken just before the game against the Cardiff & District Youth team. The comment by “Cardinal” seems to contradict this but the information I have been given was provided by one of the key players in the photograph and who also played in this match.