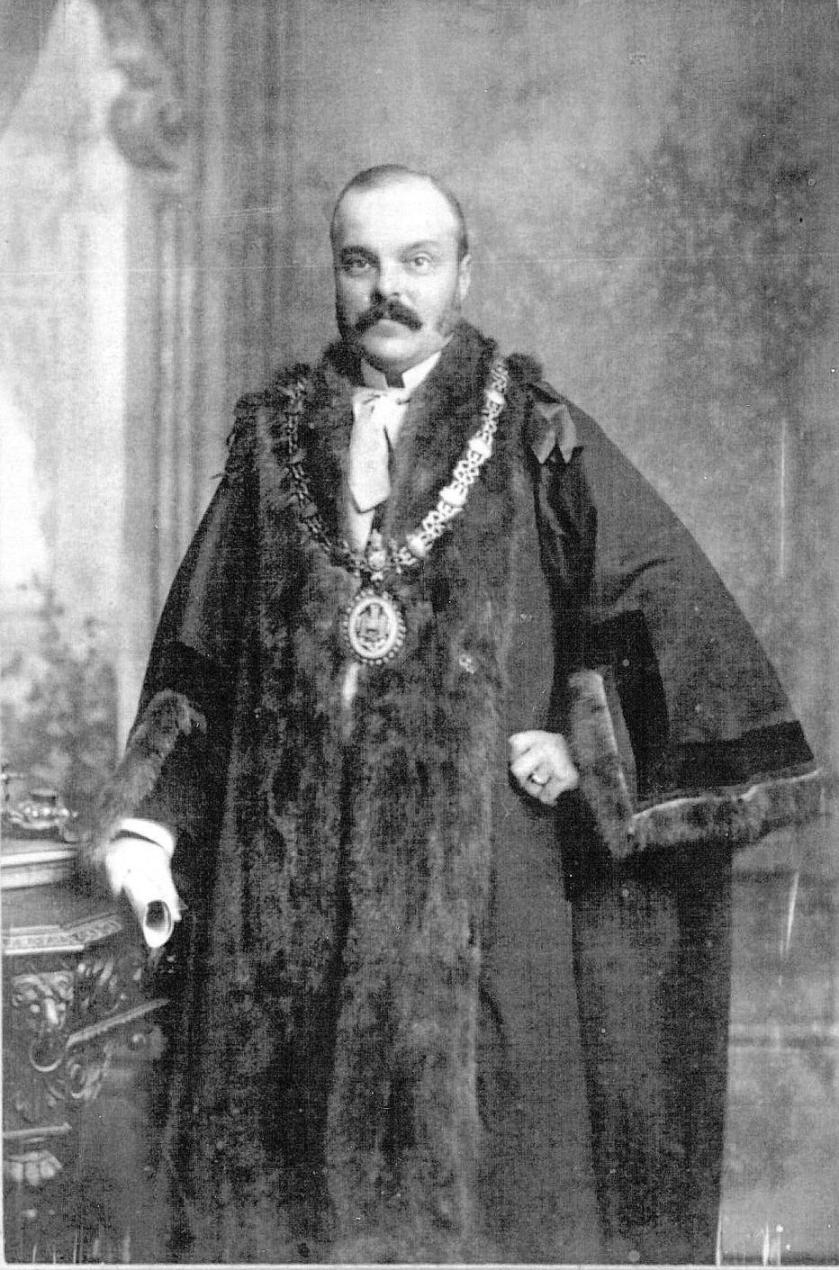 Mr. Henry Brunel White was born in 1853 and was the only son of George and Betsey (nee Thompson) White-White.

Henry’s father, George White-White JP, lived in King Street, Carmarthen. He was the son of John White who came to Carmarthen from Devonshire to keep a private school and in 1796 founded the widely known business of Messrs White and sons Printers, Booksellers, and wholesale Stationers, Carmarthen and Merthyr Tydfil. He died in 1888 and is commemorated by a stained glass window in St. Peter’s Church funded by two of his children Henry and Georgina.

The following is an extract from The Story of Carmarthen by Joyce and Victor Lodwick, St. Peter’s Press 1995 (first published 1953, second edition 1972, updated, expanded and illustrated 1994, reprinted 1995).

“One of the earliest schools was established by Mr. John White who also founded a well-known family printing business together with his wife Hannah. Born in 1762 at Knowstone, Devon, John White was appointed Headmaster of The Great House School, Chard in Somerset in 1787. He came to Carmarthen at the close of 1803 and on March 31st 1804 he went to live in 44, Priory Street. A cultured and educated man, he became a noted schoolmaster in the town. Mr. John White’s School, Priory Street, gave instruction in English Grammar; useful and ornamental penmanship; arithmetic; fractions; decimals; extraction of roots; logarithms; geometry; trigonometry; land surveying; navigation; the use of globes and other sciences. The strictest attention was also paid to the ‘morals and improvement of the pupils committed to his care.”

“Subsequently he moved to King Street where he kept a school called The Writing, Commercial and Mathematical School, which gave instruction in the same subjects as previously mentioned. Strict rules on behavior, dress, cleanliness, tidiness and discipline were laid down and had to be observed.”

“In 1796, before his arrival in Carmarthen, John White produced A New Ciphering Book or The Teacher’s Ease and The Scholar’s Help, containing a great variety of instructive and amusing sums and questions, together with a complete set of Arithmetical Tables. It was for use in Ladies’ and Gentlemen’s Schools and private families. In 1809 he produced the second edition which was printed at Carmarthen. Advertisements for his school showing the subjects taught, together with the financial terms were printed by J. White and Sons at the Commercial printing Office, Carmarthen. According to one advertisement, the rapid progress pupils make under his care is a convincing proof of the attention paid to their learning, many of whom have far exceeded the expectations of their parents.”

Until her husband’s death in 1818, Hannah White traded on her own, employing several men in printing. From 1818-1860 she traded as ‘H. White and Sons’ printers; booksellers, stationers etc. Two of their sons, George (Henry Brunel’s father) and Isaac were later partners in the printing business with their mother at Carmarthen. Another son Henry was a master printer in Merthyr and in 1850 was High Constable of Merthyr.

Henry Brunel White’s wife Betsey was the eldest daughter of Mr. George Thompson, Doric House, Woodbridge who was an Architect and became the County Surveyor for Suffolk in 1855. Her brother was the eminent architect Mr. Francis Thompson, Trafalgar Square, London. She moved to Carmarthen in 1834 at the age of twenty five to teach at Miss Woozencroft’s School, a ladies’ boarding school in Spilman Street.

Henry Brunel White was educated at Queen Elizabeth’s Grammar School and at Thistlebloom House, Mumbles under the headmastership of the Rev. John Coulson and was articled to Mr. John Hoynes Barker, Carmarthen and Messrs Cross Bros. Bedford Square, London. He married Miss Margaret Williams Martin and they had three sons and three daughters. One of their sons, Captain Howard Belmont White M.C., was Town Clerk of Carmarthen 1930-1948. He won the Military Cross in the First World War and was granted the Freedom of the Borough in 1919. The family home was The Grange, Carmarthen.

A qualified solicitor, he was regarded as one of the leading advocates in South Wales. He was Town Mayor of Carmarthen for four consecutive years 1894-1898 and Town Clerk for 19 years from 1911-1930. He was borough magistrate’s clerk for 21 years being succeeded by his son Mr. Howard B. White. He was granted the Freedom of the Borough in 1930.

Henry Brunel White became the first president of Carmarthen Wanderers Football Club in the 1894/95 season but I have not been able to ascertain how long he remained in that role.

Another descendant of the White family – Mr. David White, was Carmarthenshire’s deputy county architect and in retirement was the leading source of advice on the architecture of Carmarthen, both historic and modern. He produced a series of architectural perspectives of Carmarthen which he presented to Carmarthen Town Council. Copies are displayed on the walls of St Peter’s Civic Hall. He produced line drawings of the historic houses of South West Wales, which illustrated the ‘Carmarthenshire Historian,’ the ‘Journal of the Carmarthenshire Antiquarian Society’ and several books by the late County Archivist, Francis Jones.

David White, who had spent some considerable time researching the history and genealogy of the White family, passed away in 2012.