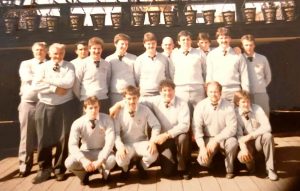 Due to the fact that the sailors based at Portsmouth were training for their Field Gun trials which are shown every year on television, they were only able to offer the Quins one game on their tour. This match was played on the 28th April 1984 against HMS Glamorgan XV. The Quins won by 24 points to the home side’s 4 points.