The Secretary of London Welsh at this time was Carmarthen born, Stuart Davies who was one of five brothers born in Priory Street. Two of his brothers, Neil and Howard were heavily involved with schoolboy rugby and Neil was a fine administrator with Carmarthen Athletic RFC. Stuart agreed to send a team to Carmarthen Park and although by this time London Welsh were passed their zenith they still possessed such greats as Llansaint born Gerald Davies, Tenby born, Jim Shanklin ( father of Tom), Geoff Evans, originally from Bury Port and Billy Hullin. I recall Stuart telling me that it was not uncommon for London Welsh to be fielding up to a dozen sides on match days and all players were Welsh born or from Welsh descendants. 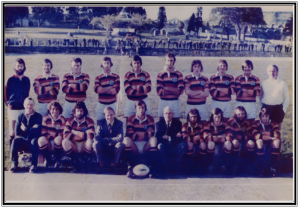 Never in their 100 year history has there ever been a more glittering, glorious or more momentous day for the Quins than last Monday.

It was the day 15 heroes walked off the Park with the cheers of an ecstatic crowd ringing in their ears and the scalps of rugby giants London Welsh safely tucked under their belts.  Like all great giant-killers the Quins made the gallery wait through 80 heart-stopping, electrifying minutes before they hammered the final nail into the Exiles coffin. Trailing  10 – 12 as the minutes ticked away all looked lost as London Welsh battered and pounded away at their line. Wave after wave of the red-shirted players were repelled, but with the end of each attack Quins looked that little weaker and a fraction more vulnerable. The gradual process of erosion seemed interminable and then in the 62nd minute the Quins exploded into life and with one massive thrust they forced play deep into the opposition.

London Welsh were penalised for a scrummaging offence and ice-cool fly-half Robert Taylor made no mistake with the 30 yard kick to earn a place for himself and the club in the record books. The grandstand finish was a fitting end to a ‘friendly’ in which neither side asked for favour and none was given. The forward clashes were hard and at times niggling, with punches being exchanged as the occasion got the better of players.  At times, particularly in the second half when the pressures built up, the Quins’ rucking bordered on the bounds of viciousness and international referee Mr. Meirion Joseph was quick to pick out the offenders and point out the errors of their ways in no uncertain terms.  Honours in the set pieces were just about evenly balanced with London Welsh shading the lines-out through burly Welsh international lock Geoff Evans and his partner John James.  Behind the scrum the Quins’ threequarters operated  with cold efficiency in defence and at times with surprising venom in attack. Hard-hitting centre Roger Richardson, an import from Abertillery, had an outstanding game and came out of the difficult task of marking the mercurial Gerald Davies with flying colours.  In attack, his springheeled runs down the field were enough to send cold shivers running through the Exiles and it was from one of his unstoppable bursts that he shot the Quins into a shock sixth-minute lead. Richardson took the ball about ten yards out and smashed through a wall of red jerseys to touch down close in. Sure-footed Taylor made no mistake with the conversion.

The score was a real crippler to the Exiles’ pride and they soon made an effort to restore some of the shine that had been wiped off their image. Threequarter moves came thick and fast but Quins were quick to react to the slightest hint of danger and nipped attacks in the bud before they had the chance to blossom.   Fly-half Alun Jenkins, usually a deadly-accurate place-kicker, failed with two long-range shots at goal and it wasn’t until the dying seconds of the half that London Welsh cut the six-point deficit.  The ball was whipped along the line and wing Jeff Davies outstripped the defence to go over near the corner. Jenkins could not add the extra points.  At half-time skipper Brian Llewellyn gathered his players around him and his pep talk must have been as pungent as the dressing-room liniment, for immediately from the re-start Quins stormed into the attack. Richardson had the  London Welsh defence in all sorts of trouble with a breath-taking run and when he was stopped he handed over to wing Malcolm Thomas who steamed over in the corner. Taylor failed with the conversion.

London Welsh’s reaction to the score came quickly through another period of sustained pressure. The Quins with forward and backs tackling magnificently held out for 13 minutes but slowly the battering began to take its toll and wing Mike Kirby took a massive chunk out of the Quins’ lead with a fine try.  Ten minutes later Gerald Davies, guesting for the visitors, left the Quins gasping in disbelief as he ghosted past players to score wide out and give London Welsh a two point lead.  As the seconds ticked away, Quins’ position began to look hopeless. Welsh kept them firmly pinned in their own half and time and  again full-back Brian Furlong, Taylor, scrum-half Peter Evans and wing Haydn James were forced into hurried touch-finders to relieve some tricky situations. Yet throughout this bombardment the Quins kept their cool and in the 62nd minute launched a counter attack which caught the visitors flat-footed. The ball was swept upfield and from the resultant scrum Quins were awarded a penalty.  The crowd held its breath as Taylor began his run up but then as the ball flashed between the posts a thousand voices boomed out the good news for the rest of the town to hear.

These were soon silenced as Welsh threw everything forward in a frenzied bid to save face. Twice they were held up short of the line and each time the Quins somehow managed to hack the ball out of play to hold on to their slender one-point lead for victory.   Although the Quins played well to a man, special mention must be made of the pack who bore the brunt of the battle. The eight – Howard Iles, Richard John, David Woodhead, Brian Llewellyn, Jeff Williams, Roger Walters, Phil Davies and Raymond Lewis – did everything that was asked of them and if they can retain this form the West Wales championship could be brought back to Carmarthen for the first time in many years.