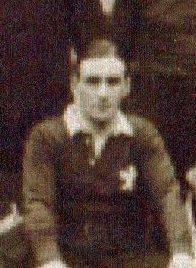 Report in the Carmarthen Journal:-

Those interested in the Rugby Code will be pleased to learn that I. T. Davies, Priory-street, Carmarthen, has secured his "cap." Mr. Davies will play his first International match at Cardiff on Saturday next against Scotland. He is one of the smartest present-day Welsh wing three-quarters and revels in plenty of work behind the pack, besides being dangerous in attack and fearless in defence. Twenty-one years of age, he touches the, beam at 5ft. 8ins and weighs 11st. lOlbs. Although young in years, he is an old footballer, and captained the Carmarthen Grammar School team during a period of invincibility; also he was regularly seen in the Quins team for two seasons, where he distinguished himself as a first-rater, hence his departure for the "Sospan Fach" 1st XV. He has also played for Lampeter College Rugby 1st XV.


Congratulations to him for getting his cap, and the only wish of all his friends is that he will give of his best next Saturday, and keep his place for some years. He is being prepared by the popular trainers of the Carmarthen Quins: Messrs. Geo. Phillips and Tom Harries, Little Water Street. Good old St. Peter's Boy.